First a big thank you to all the organisers of systemd conference. You did an amazing job and I can not wait for 2016 edition. I do wish there would be some place in the program for lightning/ignate talks that are organized ad-hoc, but now I am just being picky. See you in 2016!

rkt containers are build with help of systemd inside and take different approach how to specify containers, then for example Docker. More details you can find in the video from Alban and Jon.

I am holding my judgement of how I feel about whole rkt approach, but I can definetly agree with Alban and Jon that it goes a way to reinvent package management. And in this context I do not mean anything bad with reinventing. On the contrary, it shows that CoreOS developers have the same feeling about the current situation and state of packaging as me.

It would make this blog post too long to explain everything properly and argue what I actually mean when calling tools broken. But I promise to come back in a 2 week with a blog post only about this. I promise!

What you can read from Nix's web page is that Nix is a package manager. In NixOS (linux distribution build on top of Nix package manager) we are using systemd and also its containers (systemd-nspawn).

With help of many CoreOS developers at systemd conference hackaton, I have got to a point where I could be dangerous with rkt and acbuild. Thank you all for your patience and to show me how all this tools work.

The following part of the blog post assumes that you already have Nix installed on your system. If not get it from https://nixos.org/nix.

You can skip this step if you already have rkt and acbuild installed on your system otherwise run:

Think of nix-shell command as ad-hoc creation of custom shell environment. Like virtualenv is used in Python, but nix-shell can be used for any language on any unix-like system. Cool right?

In our case we want rkt and acbuild tools to be present this ah-hoc shell environment.

Profiles and user environments are Nix's mechanism for implementing the ability to allow different users to have different configurations, and to do atomic upgrades and rollbacks. More on Nix profiles.

To install bash and ipython into Nix profile you have to run:

Above we can see that at the current directory, a symlink, out was created, linking to /nix/store/... and all binaries are located inside out/bin folder.

Below code creates ACI image with every runtime dependency of bash and ipython.

I guess above acbuild commands are more or less self explanatory, except for the nix-store command.

Exactly the functionality that is needed to create ACI image with everything inside it. Lets look:

I guess my bash output can speak for itself. rkt brings us to bash from where we can invoke ipython. Lovely!

One more idea of usage that came to my mind is running non-secure applications inside rkt containers. Example of such application would be Skype. It is not that Skype developers are evil, but just knowing that one application is sending data in closed binary protocol out from your laptop might be considered non-secure.

First we will install Skype using Nix, so that it gets stored inside /nix/store/... folder.

With above command we installed Skype into default user profile (/home/rok/.nix-profile) which is symlinked into /nix/store/....

This time we will build a more general ACI image. Make sure that you are still in the nix-shell environment that we created before.

We prepared mounts for volumes to be mounted. /nix/store for all the nix install applications (you can look at this as /usr). /tmp/.X11-unix socket to have the ability to run the applications that require X11. And last /etc/machine-id so that applications that need dbus can get to it.

Now all that is left is running the application. 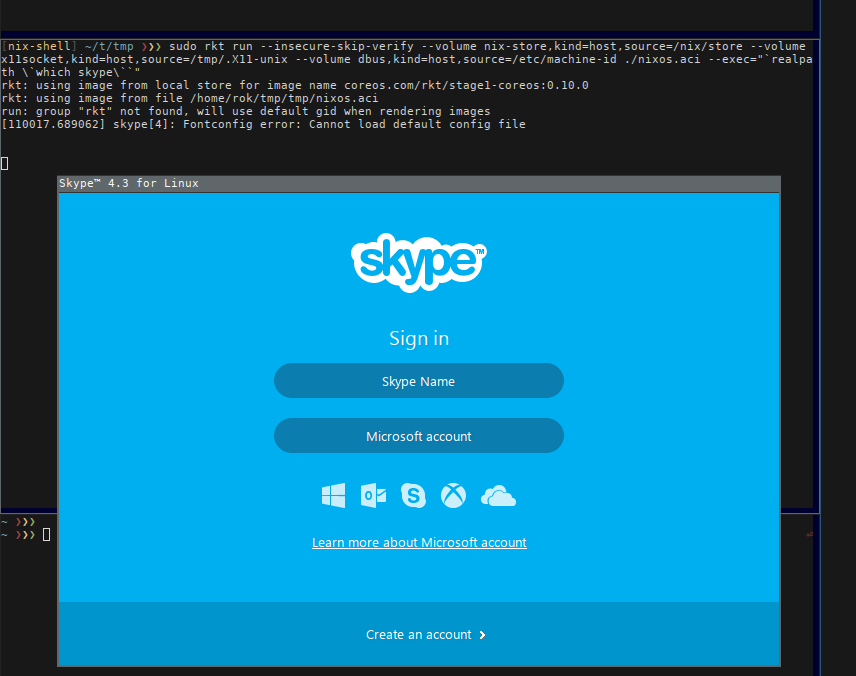 There are many things that one could benefit from building ACI images with Nix:

Nix (and its cloud deployment tool nixops) on the other side could gain another target environment to deploy to.

Probabaly there is more that these two tools could benefit from each other, by only time will tell.